What is happening to your body during fight or flight?

Fight or flight is the fear response that allows quick reactions when lives are at risk.  Initially there is a trigger that causes fear.  In a fraction of a second Adrenalin is released. During the evolution of this mechanism the triggers were life-threatening  such as a predator attacking or an injury. In modern life triggers may be as simple as crossing the road, being out in public, or thoughts of family or work. Unfortunately, in cases of severe or chronic anxiety, triggers can come from anywhere and the removal of one trigger will often result in another one appearing.  The sufferer often describes feeling trapped and fearful. 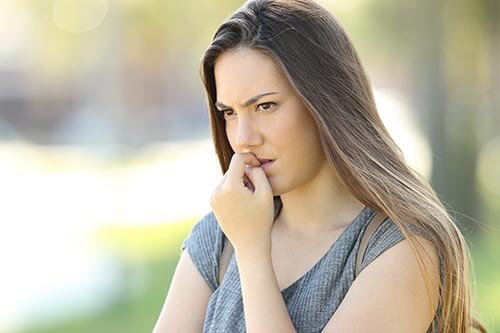 The trigger stimulates Adrenalin to be released into the blood stream which has 5 major effects:

Adrenalin redirects blood to the major muscle groups, helping to turn around and fight, or run away from danger. Fight or Flight. This extra blood flow causes people to feel superhuman or incredibly strong in times of crisis. Extra blood = extra oxygen = extra muscle energy.  However in cases of acute anxiety the sufferer is more likely to feel scared, or want to escape even when there is nothing frightening to escape from.

Blood is diverted from the digestive system to the major muscle groups which in turn, can result in the urge to go to the toilet or cause nausea, urgent urination, diarrhea or vomiting.

Adrenalin restricts blood flow to the skin and extremities. This reduces the likelihood of bleeding to death from any injury sustained in the “fight or flight”.  It can cause numbness or tingling in the fingers and toes and change the sensations on the skin.

Air passages dilate, changing breathing patterns. This can cause the sensation of being out of breath and trigger hyperventilation. Increased breathing rate provides additional oxygen.

The heart rate increases, accelerating blood circulation, providing more oxygen to the muscles.  Some describe feeling the heart beating in their chest, feeling shaky or faint as the blood rushes around their body. Some even think they’re having a heart attack. Often resulting in further Adrenalin release.

Most importantly Adrenalin is then “worked off” during a fight or flight.  Anxiety occurs when the trigger is not life threatening, there is no FIGHT and no FLIGHT. The Adrenalin doesn’t get utilised. Exercise is crucial for anxiety management because it works off adrenalin. Without sufficient exercise, adrenalin can remain in the blood for up to 24 hours. The nervous system is hyperactive when adrenalin is present. Therefore, another anxiety attack is more likely if the adrenalin has not been worked off. Regular adrenalin release then becomes more common and anxiety symptoms become more severe.

Centrally located on the Sunshine Coast we offer services to clients locally, nationally and internationally.

​Your location is not a barrier to getting help.